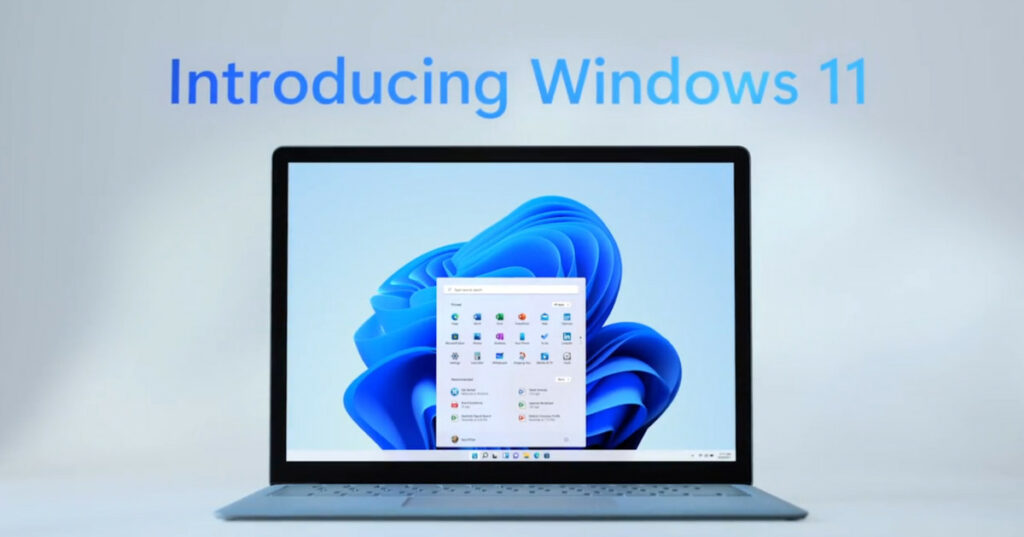 Microsoft has just announced (in a typically ‘West Coast’​ way) what’s coming in Windows 11.  Here is a rundown of what was announced at the event.

The first impression visually is that it looks kind of like Linux merged with Mac OSx. The Start Menu has moved to the middle of the screen and it has an ‘OSx like’ search bar. I have to say the interface looks really polished and has a glassy appearance.  From an interface design point of view, it looks very nice.

A new cool productivity feature is “Snap Groups”​ which will allow you to group different apps you are working on together and switch between these in one click. And now, thankfully, when switching between single and multiple monitors, it will remember what windows you had open on the previously 2nd monitor and put everything back as it was before you disconnected. Halleluja! I really missed this after moving from Mac.

Microsoft claims that everything will run faster in Windows 11 and they have improved the update experience by making the updates smaller and therefore quicker to apply. They also claim that Windows 11 is the most secure Windows ever, but there are no details on how.  I assume that this is a combination of things like the hard requirement on UEFI, Secure Boot & TPM 2.0 and improved support for passwordless authentication and ‘Zero Trust’.

Windows 11 is now even more tightly integrated with Microsoft 365 and ‘the cloud’.  This means that Windows 11 will apparently learn the way you work and will try and put the information that it thinks is most important to you front and centre.  I can’t help being reminded of the Office Assistant (Paperclip) by this,  let’s hope Windows 11 does a better job than that did.    The Microsoft 365 integrations also mean you can pick up from where you left off on previous devices. Something you can kind of do now, but it looks more native in Windows 11.

Improvements for 2-in-1 devices like haptic feedback when using the pen and improved voice recognition. Widgets now also come natively to Windows with a flyout widgets pane that you can customise with the things that are relevant to you.

There was a big fanfare around gaming where improvements have been made to provide auto HDR (high dynamic range) that automatically improves the lighting in games.  Support for Direct Storage that is currently in the Xbox will dramatically improve gaming performance.

With Windows 11, Microsoft is making it easier for developers to publish their apps in the Microsoft Store AND will allow the developers to keep 100% of revenue from store purchases.  Microsoft has also made it possible to run Android apps directly on Windows via the Amazon App Store. Interesting!

The minimum hardware requirements for Windows 11 are:

When can I get it?

The most notable omission from the announcement was a release date. The Windows 11 webpage states it is coming later this year and will be a free upgrade for eligible devices.  However, on the same page Microsoft state ‘we expect it to be ready sometime in early 2022’, so your guess is as good as mine!  If you want to see if your computer will run Windows 11, you can download a compatibility checker from here.

Something else missing was what new features will be in Windows 11 for businesses.  We have to assume backwards compatibility, but it would have been nice to know if there were any cool new features that businesses can take advantage of.

*** UPDATE *** – Microsoft has since added a Windows 11 for Business webpage that has some details, but it is still light on information at the time of writing.  However, there are deployment planning tools already available so businesses can get prepared for the upgrade ahead of time, which is great news.

I guess more will be revealed in time, so watch this space!  Need to upgrade your business systems to Windows 11?   Contact us to find out about our services.

← Two simple steps to protect your business data VIDEO: How to align in objects in Microsoft PowerPoint →

VIDEO: How to use Mail Merge

This Tuesday Two Minute Tech-tip shows you how to automate customised emails and letters using Mail Merge. Imagine; you need to send a letter or email to 10s, or even 100s of people with the same base content, but personalised for each recipient. You could manually...
Read More

What is a managed service?

If computers are an essential part of your business you will probably have someone looking after them for you, but what type of service are you getting from them?  Have you heard the expression "Managed Service" or "Break/Fix"? You may have heard these expressions and...
Read More

Spam emails are losing your business hundreds of hours every year

Spam emails: Very annoying and everyone hates them! They take up your time and make it hard for you to get other work done! A recent study found that each one of our employees could be losing 80 hours per year due the hassle associated with managing spam. That’s a LOT...
Read More

VIDEO: How to Stay Cyber Safe at Christmas

CHRISTMAS SPECIAL!!! As we are on the countdown to Christmas, today's Tuesday Two Minute Tech Tip is on a (very tenuous) Christmas theme. As we all get ready for the big day we will be thinking of having a few days or even weeks off work and relaxing. Christmas is a...
Read More

Data is the lifeblood of most modern businesses.  From important proposals and presentations to a simple one-line email that is proof of something happening that you might need months later.  However, many small businesses are not taking the necessary steps and...
Read More

VIDEO: How to managed Focused and Junk email in Outlook

Welcome to a new Tuesday Two Minute Tech Tip that will help you to manage what you see in your Inbox. Are you wondering where your emails have gone? Is something you expect to see in your Inbox not arriving anymore? This video will show you how to:    👉...
Read More

Is Your Business Ready for Another COVID-19 Lockdown?

Given the rapid rise in cases over the past few weeks, another lockdown was inevitable. Employers and employees alike will now be used to a 'new normal' where we are encouraged to work from home. During the last lockdown, we all learned that it is possible for us to...
Read More

VIDEO: How to add your availability to an Outlook Email

Today's Tuesday Two Minute Tech Tip will save you time when arranging meetings. Are you wasting time when trying to book meetings by constantly going back and forth with people trying to find a suitable time? There is a better way to find time for a meeting by using...
Read More

VIDEO: An overview of Microsoft Teams

Welcome to a new Tuesday Two Minute Tech Tip that covers the basics of Microsoft Teams. Microsoft Teams has become one of the 'go to' tools for collaboration since the start of the pandemic, but most people are only scratching the surface of what you can do with it....
Read More

How to spot a scam

Would you know how to recognise a scam? In the 21st century, you are highly unlikely to encounter a con artist in the street as they hide behind phones, text messages and emails.  But the motivations behind 21st-century fraudsters have not changed; they want to make...
Read More
This website uses cookies to improve and customise your browsing experience and for analytics and metrics. To find out more, see our Privacy Policy.
Accept Reject Read More
Privacy & Cookies Policy

This website uses cookies to improve your experience while you navigate through the website. Out of these cookies, the cookies that are categorized as necessary are stored on your browser as they are essential for the working of basic functionalities of the website. We also use third-party cookies that help us analyze and understand how you use this website. These cookies will be stored in your browser only with your consent. You also have the option to opt-out of these cookies. But opting out of some of these cookies may have an effect on your browsing experience.
Necessary Always Enabled
Necessary cookies are absolutely essential for the website to function properly. This category only includes cookies that ensures basic functionalities and security features of the website. These cookies do not store any personal information.
Non-necessary
Any cookies that may not be particularly necessary for the website to function and is used specifically to collect user personal data via analytics, ads, other embedded contents are termed as non-necessary cookies. It is mandatory to procure user consent prior to running these cookies on your website.
SAVE & ACCEPT
Share This