Facebook has been a part of our lives for the past decade and Facebook Meta is Facebook’s next step into the future. Facebook Meta is an augmented reality system that will allow users to play games, purchase items, meet friends, and more through their Facebook account. The possibilities are endless with this new interactive platform! Facebook announced that they are making a $150 million investment into training creators and developers with programs like Build 2019 so people can create virtual reality (VR) content outside of Facebook. This includes cybersecurity courses as well as other educational opportunities on how to make VR content. With these changes coming up soon, many things will change but it looks like it’ll only be for the better!

Facebook Meta will make Facebook a more powerful and interactive platform. It’ll not only be the social media website we’ve grown to love but it’ll also be an augmented reality system that can allow you to do anything from playing games to virtual meetings in a VR environment!

Mark Zuckerberg (founder and owner of Facebook), held an event by the name ‘Connect 2021’ where he announced Meta. Facebook Meta is Facebook’s next step into the future and it’ll allow users to play games, purchase items, meet friends, and more through their Facebook account. The possibilities are endless with this new interactive platform!

Facebook acquired Oculus in July 2014 for a staggering $400 million and 23.1 million common shares of Facebook, valued at $1.6 billion, as well as an additional $300 million assuming Facebook reaches certain milestones. Facebook has stated that “the acquisition is part of Facebook’s vision to provide the world with more open and connected digital experiences.

Facebook has stated that Facebook’s mission is to make the world more open and connected. Facebook hopes Oculus can help them achieve this mission through virtual reality (VR) 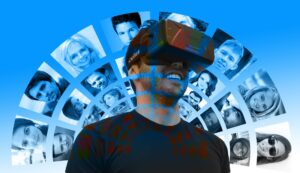 technology, which will allow users to experience content in an immersive way. This means one could visit a new city without leaving their home or attend class from anywhere around the globe; Oculus has the potential to change how we interact with Facebook and the world.

Facebook is not the only company investing in VR technology – Google, Sony, Samsung, HTC, and Microsoft are all developing their own VR platforms. However, Facebook’s Oculus may have an edge over its competitors because of Facebook’s large user base (over a billion users) and Facebook’s existing network of VR developers. Facebook will allow Oculus to remain independent, which should encourage more people to use the device and create new content for it.

Working in the Metaverse 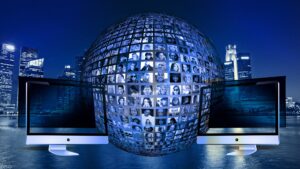 Oculus headsets are becoming more and more popular, with the potential to revolutionise how we work and Facebook has announced their plans for Facebook at Work. This new platform will allow users to enter a virtual reality environment in which they can collaborate with colleagues.

This presents some interesting possibilities, especially when Facebook is involved. Facebook at Work will be separate from the usual Facebook platform, but it’s not hard to imagine how Facebook could integrate their plans for Oculus headsets into this new space.

All in all, Facebook’s plans for Oculus and Facebook at Work are an exciting development in the world of virtual reality. It will be interesting to see Facebook’s next moves in this space, and how they’ll affect the future of the Metaverse.

Are you thinking about the possibility of working in ‘The Metaverse’?  Get in touch, we’d love to know more!

← VIDEO: An overview of Microsoft Teams VIDEO: How to Work with Files in Teams →

How to delay Windows 10 updates

It is an undisputed fact that, to keep your computer secure, you should keep the software running on it up to date.  We go on about it again and again and again.  However, there is a balance between making sure that you have the latest Windows 10 updates, and also...
Read More

VIDEO: How to use Windows shortcut keys

Good morning everyone and welcome to your Tuesday Two Minute Tech Tip. 👉 Tired of dragging the mouse around the screen to access the things you use all of the time? 👉 Want to hear about some handy shortcuts Windows that you never know existed? Today's tip will help...
Read More

Getting Started With Microsoft Teams

Microsoft Teams is a powerful collaboration tool and is included with all business versions of Microsoft 365.  If you have Microsoft 365, and are not using Teams, or you don't yet have Microsoft 365 and want to know what Teams can do, this video is a quick...
Read More

VIDEO: How to Provide Remote Support for FREE with Quick Assist

This Two Minute Tech Tip shows you how to view or control someone else's screen for FREE. As an IT managed service provider we have lots of tools we have to pay for to help us support our clients. However, if you've ever been in a situation where you are trying to...
Read More

VIDEO: How to add your availability to an Outlook Email

Today's Tuesday Two Minute Tech Tip will save you time when arranging meetings. Are you wasting time when trying to book meetings by constantly going back and forth with people trying to find a suitable time? There is a better way to find time for a meeting by using...
Read More

Why is my computer so slow!?

“Why is my computer so slow?” is a question heard time and time again and is one of the most common computer complaints. There are a variety of reasons that your computer can appear to be running slowly. I say ‘appear’ as it may not actually be your computer that is causing the problem. Read on to find out possible reasons for this problem.

VIDEO: An overview of Microsoft Teams

Welcome to a new Tuesday Two Minute Tech Tip that covers the basics of Microsoft Teams. Microsoft Teams has become one of the 'go to' tools for collaboration since the start of the pandemic, but most people are only scratching the surface of what you can do with it....
Read More

VIDEO: How to Tidy up Copied Data in Excel

This Tuesday Two Minute Tech-tip shows you how to tidy up data in Excel spreadsheets. Do you have data in a messy format and need to change it so it is organised? Have you ever received data in Excel or in a text file or Word document and wanted to change it from rows...
Read More

How to scan a QR code with your phone

As more venues open up for face to face meetings, some are introducing their own track and trace systems using a QR code that you need to scan with your mobile phone. But how? This video explains how to scan a QR code with your phone so you are not trying to figure it...
Read More

VIDEO: How to use footnotes and endnotes in Word

This Tech Tip is another tip for Microsoft Word. If you use Word to write documentation, contracts or any other type of detailed document, then this tip is for you. Usually, when you write such a document, you may need to expand on certain sentences without making the...
Read More
This website uses cookies to improve and customise your browsing experience and for analytics and metrics. To find out more, see our Privacy Policy.
Accept Reject Read More
Privacy & Cookies Policy

This website uses cookies to improve your experience while you navigate through the website. Out of these cookies, the cookies that are categorized as necessary are stored on your browser as they are essential for the working of basic functionalities of the website. We also use third-party cookies that help us analyze and understand how you use this website. These cookies will be stored in your browser only with your consent. You also have the option to opt-out of these cookies. But opting out of some of these cookies may have an effect on your browsing experience.
Necessary Always Enabled
Necessary cookies are absolutely essential for the website to function properly. This category only includes cookies that ensures basic functionalities and security features of the website. These cookies do not store any personal information.
Non-necessary
Any cookies that may not be particularly necessary for the website to function and is used specifically to collect user personal data via analytics, ads, other embedded contents are termed as non-necessary cookies. It is mandatory to procure user consent prior to running these cookies on your website.
SAVE & ACCEPT
Share This